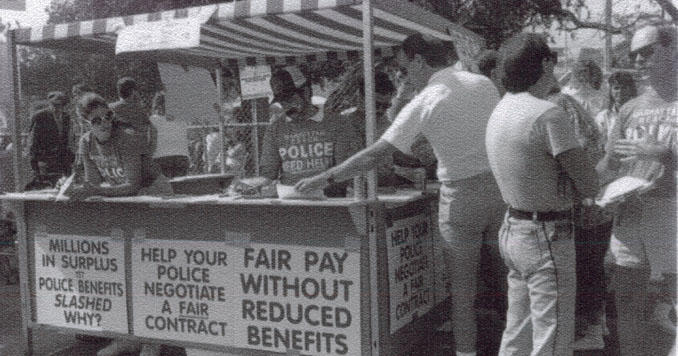 The 1980’s were a decade of complaints, law suits, and general negativism for the Manhattan Beach Police Department, however the majority of the community thought the force was doing an excellent job. It was felt that officers were truly dedicated and professional when it came to enforcing state criminal statutes and traffic laws, exercising courtesy, and exhibiting friendliness when patrolling the city streets.

In-house, however, there was a great deal of controversy. In the fall of 1986, a Manhattan Beach officer was arrested on suspicion of raping a 23-year old female prisoner while she was incarcerated in the Manhattan Beach jail. The charges against him followed several weeks of investigation by a special task force of the district attorney’s office, which found enough evidence to prove guilt beyond a reasonable doubt. After all was said and done the officer plead no contest and resigned from the Manhattan Beach Police Department.

Budget cuts during the same time frame were another cause of concern for citizens in Manhattan Beach. Contract negotiations with the city over both pay and benefits found the 49-member Police Association frustrated and angry. There had also been a no-confidence vote of the new Police Chief. On September 20, 1988, more than two-dozen association members picketed outside City Hall as council members and city staff arrived for a city council meeting. The “angry blue line” announced a wide range of job actions, one of which included no ticket writing.

To offset the frustration of the department, promotional posters were produced to put across a positive profile of the men and women law enforcement officers. Slogans such as “A Few Good People” adorned the posters that were visible around town.

In the mid-decade, Manhattan Beach would be rocked by two trial cases which made international news. One being the McMartin child abuse case, the other a bank president who assisted the IRS in the capture of a group of “grandmas” engaged in laundering drug money through a local bank.

As the years went on, the department, much like the rest of the nation, saw an increase in: armed robberies, gang activity, home burglaries as well as the need to create a special narcotics investigation team. While the use of illicit drugs had always been a concern of the department, the rise in substance abuse prompted a need to reevaluate efforts in the area. In the 1990’s two additional police officers were given training in the specialty assignments of narcotics and vice enforcement.

Over the next twenty years, the community saw more Medal of Valor and Distinguished Service awards given to Manhattan Beach officers, the retirement of Chief Ted Mertens and the hiring of the eleventh police chief, Ernest Klevesahl. The passing of Officer Martin L. Ganz, who was shot down while making a routine traffic stop, studded the community. At the age of 29, he was the second Manhattan Beach police officer killed in the line of duty.

Though the community was still four square miles, the make-up of its population and visitors were rapidly changing. So too, were police methods and technical equipment. The department recognized the need to install video cameras and wireless microphones in their patrol cars. Public awareness of the modernization created some fear of “Big Brotherism,” yet such devices had long been installed within the station and jail area.

Finally, in early 2000, the corner of Valley Drive and 15th St. became the location for the new Police/Fire Safety Facility Building. We also had the Twelfth Police Chief, Rob Uyeda join the force in Manhattan Beach.